I’ll be super real – I vastly prefer digital cameras to film. The ability to adjust settings almost infinitely (at least compared to film – you mean my ISO is locked to the film I load the camera with??), the ability to take endless photos from endless angles quickly and efficiently. The cost! Yeah, there’s the outlay for the camera but then.. that’s it. No film to buy and develop. (And uh, developing ain’t cheap.)

I have to disagree with the most common sentiment I see about film photography – that it forces you to be “in the moment.” For me, I am so concerned with the settings of the camera and ensuring my shot comes out just right, or else what a waste of 1/32nd of a film roll, that it inexorably takes me fully out of the moment. With digital, I can fully, totally focus on my subject. With film, my brain is 80% occupied with the thing in my hands and 20% on my subject. I think it makes me an outlier to most, or maybe I’m just so accustomed to digital at this point it’s hard to make that adjustment.

Buuuut, that said, there is a certain charm to film. Of course, nothing beats that authentic film grain. And there’s something of a bit of suspenseful mystery of waiting for that film to develop. It’s a nostalgic ritual, I think. It very much reminds me of the excitement of getting back to the car with your pack of photos then tearing through them. So recently I shot a few rolls of film, some around town, and some on a trip to Los Angeles. A lot of the photos ended up rather so-so, visually uninspiring, not really saying anything with their subject matter. But some I think came out rather good! Here’s my 4 favorite photos from the film shots I’ve taken in the last few months: 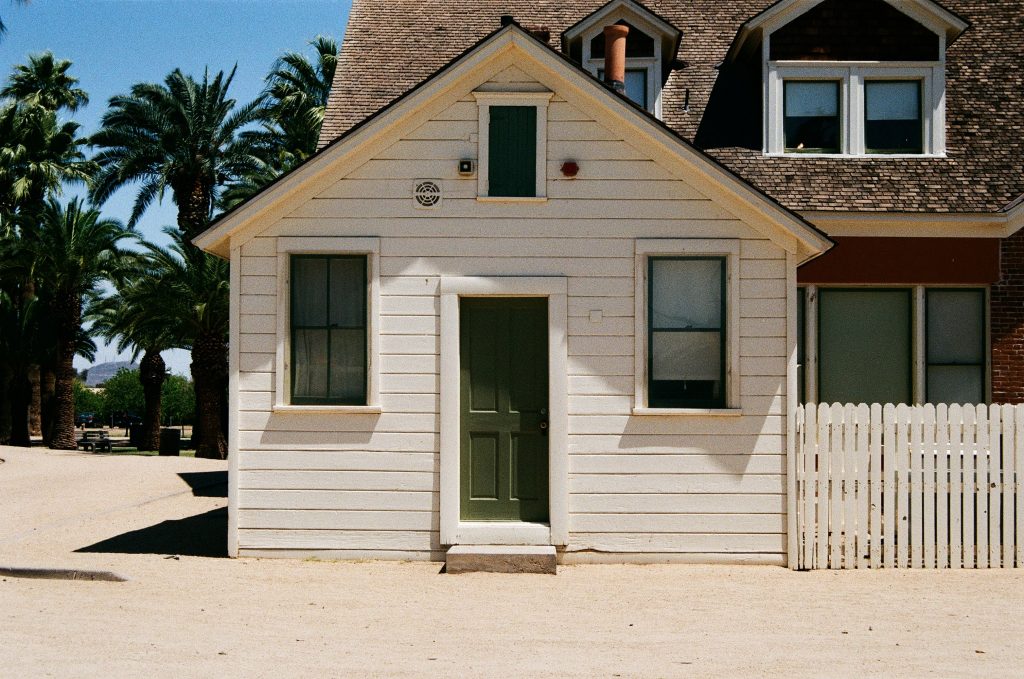 I love the clean, geometric shapes of this building. But I especially love the contrast of the building – built decades ago and in a style that reminds me of Oklahoma farmsteads – with the palm trees in the back. It seems out of place somehow, as if it’s a set piece, though this was an authentic historical building as part of a farm that’s now a park. If I picked one word to sum it up, I’d say surreal. 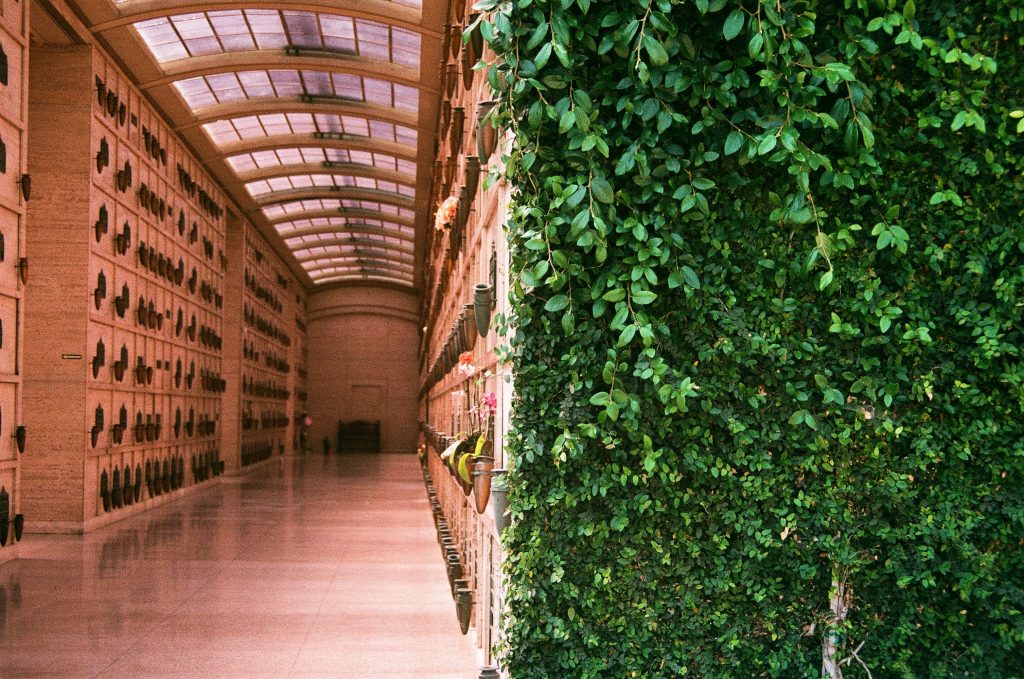 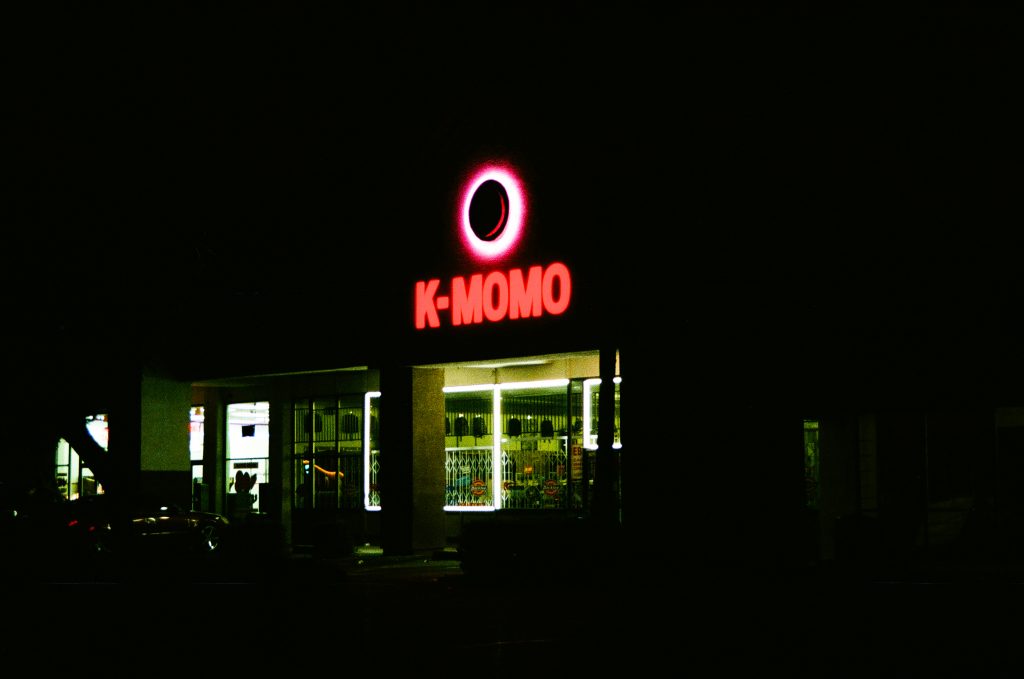 This photo was mainly a test to see how my camera did in low light. Turns out not too badly. I like this image because to me, it represents the feeling I had when I took the photo. A dark night punctuated by the garishness of this laundromat. The red of the sign a screaming beacon at night, the harsh red with the nauseating shades of green from inside the laundromat itself a wholly unappealing combo, which perfectly represents just how unfun it is to have to go to a laundromat. 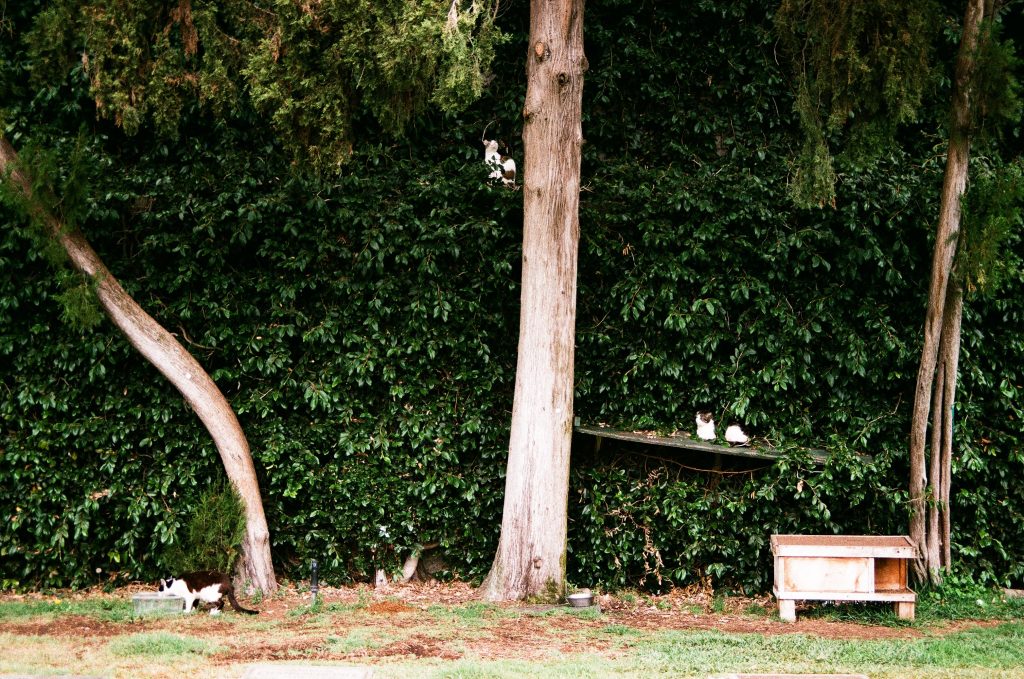 Threes. This is my favorite photo of all the ones I’ve had recently developed. Content-wise, it is telling a lovely little story, of this colony of wild cats going about their day. Drinking some water, lounging, exploring. Visually, it’s an engaging photo. There’s the three subjects of the cats in a triangle shape, as well as the three trees spaced out and carving up the photo so it’s not such a wide expanse of leaves. Overall, I just find it aesthetically pleasing with an amusing subject matter to boot! What more could you ask for?

Film is hard and a little frustrating, too. Learning how to load film (I did it backwards a couple times), technical issues (my film camera is very old.. for starters, the photo counter doesn’t work anymore), and the struggle of making sure I’m focused and my aperture and shutter speed are spot on before my subject grows old and dies (or you know, just moves, and then the shot I wanted to take is gone) were all roadblocks. But it doesn’t mean it can’t be rewarding, too. I think film will always be a side dalliance in the hobby of photography for me, but it is one that is fun to visit at times. And though I may have only come away from 3 rolls of film with 4 photos I was proud enough of to show off, that’s still an accomplishment, eh? Better than none!