Meal prepping is the hottest trend in workplace lunch preparation since the tuna sandwich. I love organization and planning, so I always feel my heart pump a tick faster when I see one of those delightful top-down view sped-up videos of someone effortlessly preparing a week’s worth of delicious daily lunches. This person has all their shit together!, I think wistfully to myself. I want so desperately to be that person who has lunch planned and sorted by the end of their weekend and just doesn’t have to worry about lunches again for another 7 days. But no matter how I try, the standard lunch meal prep just doesn’t fit me.

The biggest reason why I just can’t hang with the lunch meal prep is I don’t want to eat the same thing for lunch every day. I just get so bored! I don’t mind more frequent repeat lunches, but just literally the same thing every lunch day? I’ll be so irritated with life by the end of the week.

The second reason I’m not about that tradish meal prep life is that for the life of me, I don’t know how people are putting together these meals in advance where the ones for the end of the week aren’t slimy/mushy/have weird flavors. A friend of mine posted some photos on facebook today of her snack/veggie prep for the week, and it looked great, but I was eyeballing all the presliced cucumber – whenever I do that, that shit is slime city by day 2. I dunno if there’s some secret trick, or if really the trick is just not caring that 4 days after preparing your food it’s just not as delicious as it was when you first prepared it.

But I realized that my two main issues as I’ve mentioned above can both be solved by one major household appliance – my freezer. Sameness fatigue eliminated – I can grab what I want. I can have a variety of things available and so I can still have some flexibility to appeal to my cravings and wants on a particular day, rather than on day 3 it being “You better STILL want that chicken and zucchini because that’s all you got!” And of course, frozen stuff keeps great for much longer than the fridge.

The only real downsides is you can only have freezer-appropriate foods. But that’s why I’ve embarked on a journey to work on developing freezer-friendly prep meals. My major advancement has been in the world of breakfast, and I’ve focused on that first because even more so than lunch, I have a hard time getting together a real breakfast in the morning. (And then when I get to work, hungry, those cookies in the lunch room are a lot harder to resist.) My pièce de résistance is my bulk breakfast burrito prep.

This is honestly the easiest meal prep ever. There’s a mild time investment because it is a lot of cooking, but it’s not difficult cooking. First up, just cook whatever the hell you like to eat in breakfast burritos. Above, from the left going clockwise, is shredded cheddar cheese, cooked breakfast sausage, cooked bacon, and a big plate of scrambled eggs. I don’t put both the sausage and bacon in the same burritos (though hey, I ain’t stopping you) but I make batches with each, so there’s some variety. Fill and wrap each tortilla as you would any other breakfast burrito. 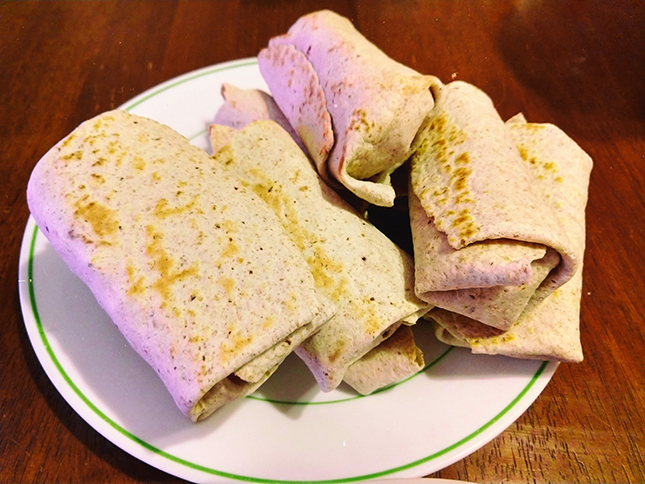 I discovered the secret to perfect breakfast meal prep burritos is browning them in the pan before freezing them. It has a couple benefits: first, it cements the burrito closed, and second, it keeps the tortilla from getting mushy. I guess if you like mushy tortillas then by all means skip this step, but I think it really contributes to the overall breakfast burrito experience. 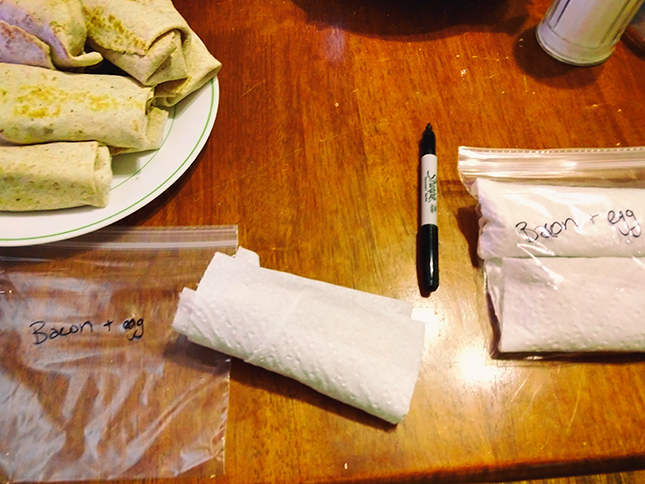 The last step is to individually wrap them in a paper towel and package them up for freezer storage. The paper towel is another must-do step. It prevents any frost buildup on the food itself, and then I always microwave it still wrapped in that paper towel. It helps keep the burrito from drying out in the microwave.

All told I ended up with 19 burritos from this batch. That’s a lot of damn burritos. I don’t intend to eat one of these every day (see previous whining about eating the same food every day) but they’re really great for the mornings I can’t stop slapping the snooze button then end up running out the door 20 minutes later than I should be.

– lunch burritos. I once did a bulk batch of regular old Mexican burritos that I used as lunch stock. A+ idea, same concept as the frozen burrito you buy at the store. I should really do these again, now that I’m thinking about it..

– leftovers! Once when doing a batch of these breakfast burritos, I had some leftover steak so I made steak and egg burritos. Holy crap they were good. I’ve also put some leftover sauteed zucchini in them. Yum.

I’ve also done non-burrito things before. I’ve made breakfast sandwiches, same concept, different form. Yesterday I made a batch of bbq chicken hand pies that I froze as well. I haven’t tried one of those yet, we’ll see how they turn out. All in all, I love to use the freezer for meal prep. For my pickiness and my lifestyle, it works way better for me than the standard kind of meal prep.