It’s something I’ve sort-of distantly wanted since I was 16 years old, but never really seriously thought about until the last couple years. I went through many different design and subject ideas, instagram stalked nearly every single tattoo artist in the greater Phoenix area (even some in Tucson, you know, just in case the perfect artist couldn’t be found within a city of millions), and even consulted with a handful. (I’m not an impulsive person. Research ought to be my middle name.) But the funny part is, for all the research I did, nothing at all prepared me for the reality of it, both physically and mentally.

It’s highly personalized. Nobody’s description of the feeling at all matched mine, of course. Everyone’s body is different, and tattoo artists are different. Different locations on the body, different styles of tattoos, your own personal pain tolerance – it all adds up to one singularly unique experience that nobody will quite feel as you do. But because I was very curious about other people’s experiences before I got my first tattoo, and if you’re reading this then you probably are curious as well, then here is a list of all the different physical sensations I had at different points of my tattoo experience:

– like being cut with a super thin, super sharp knife, or scalpel. Pain, but a biting and quick pain. Like when you slice yourself with a very sharp knife.
– like being cut with a rusty, dull, serrated blade. Deep, rough pain.
– like fire being dragged across my skin, leaving a burn behind it.
– like a tickle.
– like a stab to a nerve ending, that shot tendrils of pain up my arm.

All this varied on which part of the tattoo was being worked on (close to my inner elbow was where I got the shooting nerve pains, but closest to my wrist was where it felt like being cut with a rusty blade) or the technique (filling in color was like fire, tiny detailed lines were like a tickle, and long lines were like sharp cuts).

And that was just the literal tattoo part. For all the forum threads and first-hand accounts I read ahead of time, I don’t recall any mentioning the pain of the tattoo artist handling your abused skin. Towards the end, every time he pulled my skin taut, it was an extra layer of hurt on top of everything. Every time he wiped it down with an antiseptic wipe to clear it of blood and ink, there was a brief sense of cooling relief, followed immediately by the stinging and burning of the alcohol (or whatever was in the wipe!). Every time he rubbed a bit of ointment on it, it was like having someone touch the worst sunburn you’ve ever had. Basically, everything about the process is painful, beyond just the actual needle part. Oh, and you have to sit or lay still for the entire process. On your side the entire time, like me? Get ready for a sore hip from not being able to adjust yourself and a numb hand from laying your head on it!

The other thing that’s less touched upon in the blog posts about getting a tattoo is the mental aspect. Like everything else about a tattoo, it’s a very personal response. But that first week after getting my tattoo, I felt probably what would be unexpected emotions – surprise at myself, insecurity over my choice of tattoo, alienation over my arm and the foreign substance I’d paid someone to stick in it. Getting a tattoo is a traumatic experience, literally – you are causing a lot of physical trauma to yourself. There is a lot of adrenaline and other hormones whipping around in your body the entire time. For me, it kind of didn’t feel very real until it was over, and then I was like oh.. what did I just do? Hah. It’s such a permanent act, and I’m sure there are plenty of people who are like “whatever” to that, but it was very impactful for me that my body was so fundamentally altered. So there was a bit of a mental quagmire to sift through, but time was the cure there. That only lasted about a week before I got over it and just embraced my tattoo, which I love fully. And of course, why wouldn’t I? I loved it before I actually got the tattoo. Trauma is a funny thing!

Why did I get this tattoo?

Well, because it’s cool looking, mostly! I got my very first “what’s the meaning behind it?” question two days after getting the tattoo, when I returned to work. I knew I’d be getting that question, and yet I didn’t have a very good answer prepared regardless. Because I can explain how I came up with the design, but really, there’s not that much of a “meaning” behind it. It’s just a neat design that is inspired by some things I like a lot.

I mentioned I’d been thinking of tattoos since I was 16. Those potential tattoos all had “meanings” behind them, and they were all fairly terrible ideas and would not have really stood the test of time. (Thank God tattoo shops won’t tattoo 16 year olds.) The tattoo I ended up getting has no deep meaning, nothing profound, and I absolutely love it. Which, I would never have really considered that you could get a tattoo without “meaning” until I knew someone who had done the same. A few years ago my sister in law was telling me about her tattoo – a slice of cake on her arm – and how it doesn’t mean anything. Except for “I like cake.” A part of me just thought, really? You can do that? Just.. get a tattoo without “meaning”? And yeah, you most certainly can! Since I started more seriously considering tattoos in the past couple years, I discovered that actually, lots of people just get tattoos because they look cool. It’s art on your body! Of course how it looks is a huge factor. So why not get one that just looks cool? Not to say getting a tattoo with meaning is bad, of course not. But it’s not a prerequisite.

In the end, I’m quite happy with my tattoo. It’s only been 2 and a half weeks since I got it so it’s not yet fully healed, but it’s reached a point where I feel it’s good enough to show off: 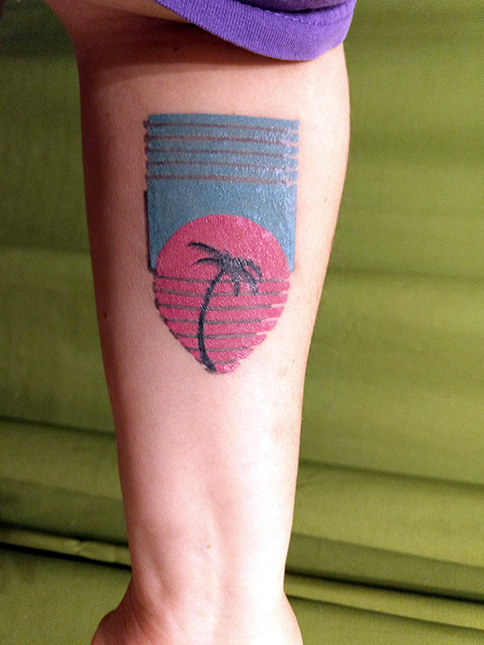